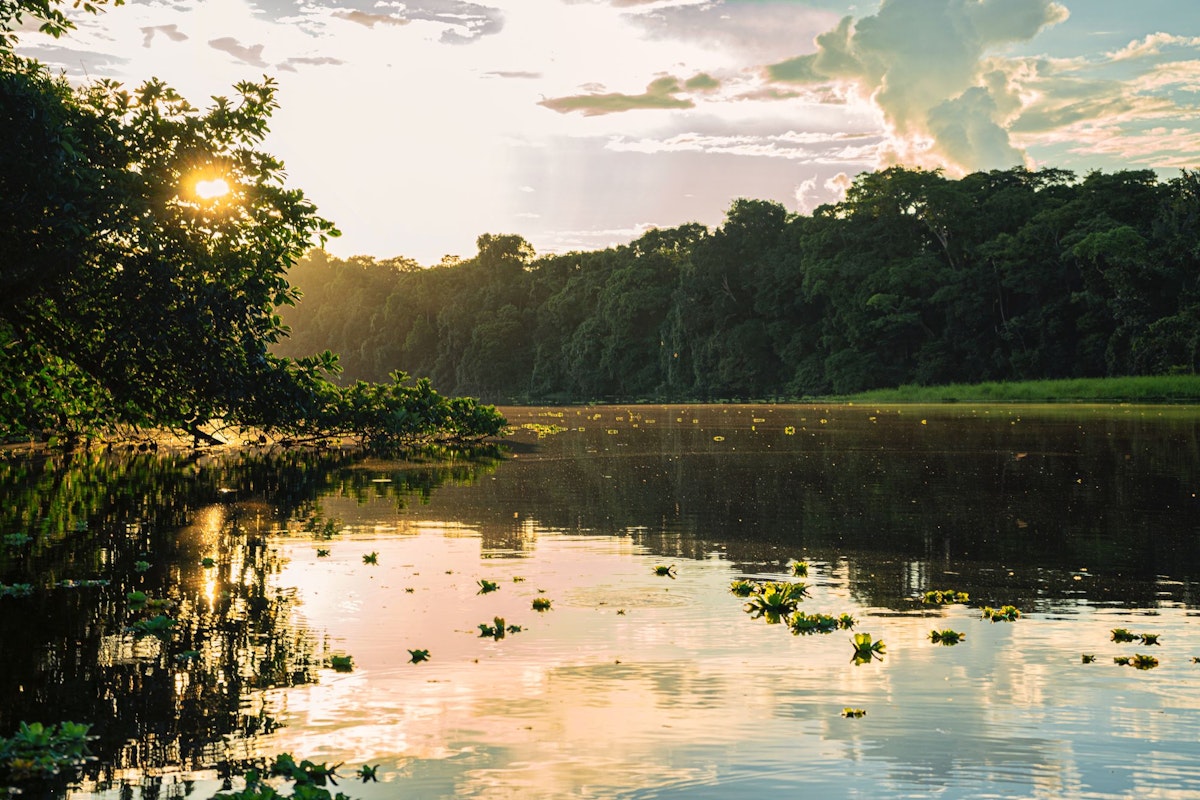 Few places are as iconic as the Amazon rain forest, and with good reason: It's one of the world's wonders, a cradle of biodiversity, home to a quarter of earth's terrestrial species.

It's also essential in our fight against climate change. This massive forest is a massive carbon sink, and may have absorbed as much as 10% of the carbon we have released. In total, these trees hold hundreds of billions of metric tons of carbon—which, if released again, could have a domino effect, warming the rest of the planet catastrophically.

The basics of the Amazon

The forest includes as many as 400 billion trees, which together hold some 120 billion metric tons of carbon—15% of the vegetative carbon on earth. The scale of this forest affects weather patterns across the continent and beyond. As water vapor drifts west above the forest, it is repeatedly absorbed and re-emitted by the mass of leaves, creating a "flywheel" that helps provide water to the agricultural regions south of the forest.

What is happening to the Amazon?

Climate change has a complex effect on the forest. The increased CO2 in the atmosphere can act like a kind of fertilizer, helping to grow more trees. On the other hand, the increased heat that accompanies CO2 kills trees—and this deadly effect is now stronger. Climate change is killing the forest, in other words.

As trees die, they release some of their stored carbon; even unlogged portions of the Amazon rain forest are likely to become a net source of carbon by 2035 due to this die off.

Each tree that dies releases carbon into the atmosphere. That makes the prospect of a "dieback" a terrifying prospect for the climate at large.

As for logged portions of the forest, they already seem to be a carbon source. Humans are killing trees ourselves, sometimes to be used as timber, sometimes to clear the way for mining or agriculture. According to some estimates, 20% of the forest has been lost —an area the size of Texas, though it is spread across many tangled ribbons of land, as the NASA video below shows. This has made the forest as a whole a contributor to emissions.

Often, trees are removed through burning; in 2019, tens of thousands of fires flared across the forest, sparking international media attention. In São Paulo, Brazil, there was so much smoke that street lights had to be turned on three hours earlier than normal. These fires were likely set by ranchers and farmers trying to clear land, and in 2019 deforestation rates in Brazil spiked higher than at any point in the prior decade. Deforestation only sped up in 2020, unfortunately.

Since the forest helps retain atmospheric moisture, this deforestation has altered the local climate. Dry seasons within the forest have grown longer and hotter. This is more than just a local problem; as we cut down more and more trees, we could eventually launch what's called a "dieback," a tipping point past which the forest can no longer survive. The death of the forest would mean a massive increase in atmospheric CO2.

The politics of the rain forest

The recent surge in deforestation is often blamed on Brazilian President Jair Bolsonaro. For years, international groups have invested in forest protection in Brazil, efforts Bolsonaro is now resisting. He wants Brazil to thrive on its own—in part by clearing the forest so that industries like ranching can take hold.

This is a throwback to an earlier era of Brazilian politics. In the 1960s, the Brazilian Army began to cut roads through the forest; credit programs helped incentivize Brazilians to leave the cities to move into this interior frontier, partially as a means to fortify the country against foreign invaders. In 1988, after the country's military dictatorship was removed, a new constitution enshrined measures intended to protect the forest. By then, though, a tenth of the forest had been lost. Deforestation remained high for another decade; NGOs pressure eventually pushed industries to stop buying crops that were grown in deforested regions, leading to some progress.

Now, as I indicated above, the rates have climbed once more. The rising power of the the ruralistas, as Brazil's pro-farming bloc of politicians is known, combined with Bolsonaro's presidency, helped launch a quick rollback of environmental protections over the past few years—slashing budgets, dismantling agencies, gutting still-young laws. Bolsonaro at one point blamed the 2019 fires on NGOs, which he said were lighting blazes so as to have an excuse to intervene in Brazilian affairs. Bolsonaro did dispatch the military to extinguish the fires, but declined any international support.

Brazil's president blamed a surge of forest fires in 2019 on NGOs—who he said set the fires in an effort to further their cause.

Bolsonaro has also targeted Brazil's indigenous communities, who are among the best protectors of forests we have. He has vowed not to allow further land to be demarcated as indigenous territory, and complained about how much of the country—14%—is in indigenous hands. His election coincided with a surge in violence towards indigenous people.

These politics make for a grim story, but the situation is not hopeless. In the wake of the 2019 fires, three-quarters of Brazilians indicated that they supported better protections of the forest. Meanwhile, indigenous groups are in Brazil and beyond are banding together and taking their case to court. These are the leaders we'll need to save the forest—and to save the planet.