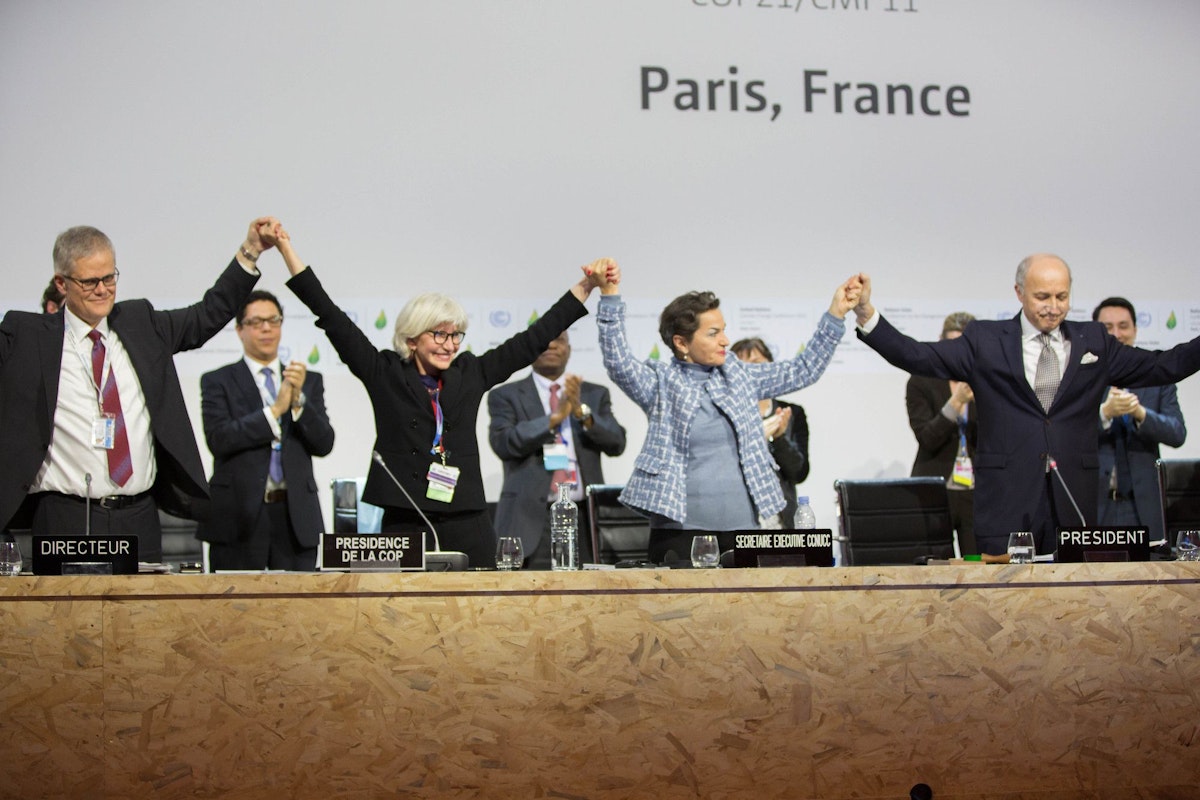 The United States—which is second only to China in terms of annual greenhouse emissions—has officially withdrawn from the Paris Agreement. This marks a major turning point for a once-heralded global treaty.

When the Paris Agreement came into effect in 2015, it was the first attempt to establish a climate-mitigation program that would include every nation in the world. It was carefully designed to increase its political appeal—but it's just that design, some people believe, that has led to its flaws.

Today, despite those flaws, it remains the reigning global policy tool controlling climate-mitigation attempts. Here's how it works.

How did the Paris Agreement come about?

The United Nations has been hosting annual climate-focused negotiations since 1995. These meetings are known as Conferences of the Parties (COPs).

In 1997, at COP3, the Kyoto Protocol was finalized. This was the first binding treaty focused on fighting climate change. It was designed to last through 2012, and by 2009 leaders were attempting to craft a replacement. For the first few years, negotiations  broke down until in 2015, at COP21, changing politics in the United States and China—the world's two largest emitters—led to a breakthrough. Both countries' executive-branch leaders were eager to act on climate change and were willing to work together to find a compromise.

What are the goals of the Paris Agreement?

This last goal is the most important, and is the only goal that is quantified. But the way it's quantified is confusing. How much global warming is too much? The Paris Agreement can't quite decide.

How much global warming is too much? The Paris Agreement can't quite decide—a reflection of the sometimes bitter politics around climate change.

The goal is to hold "the increase in the global average temperature to well below 2°C above pre-industrial levels and to pursue efforts to limit the temperature increase to 1.5°C above pre-industrial levels." In other words, we have to keep warming below 2°C but we really should try to keep it below 1.5°C. (Both goals are for the end of this century.) This schizophrenic statement reflects the contentious state of climate negotiations: Some countries are very motivated to stop climate change, and felt that 2°C of warming was simply too much, while others weren't willing to sacrifice enough to meet a more ambitious goal.

For a closer look at these goals, find the full treaty here.

How does the Paris Agreement aim to accomplish this?

One huge difference from the Kyoto Protocol is an emphasis on voluntary measures. Under the Paris Agreement, each country gets to set its own emissions reductions targets, called its nationally determined contribution (NDC), rather than have these targets imposed. This was largely a concession to U.S. politics: Because the treaty did not impose substantial legal obligations, President Barack Obama was able to ratify the treaty without passing it through the Senate—which, given the Republican majority, would have almost certainly voted against the agreement.

Each NDC is supposed to contribute to the world's overall goal of limiting warming to 2°C. Countries are required to develop new NDCs every five years, each more ambitious than the last. The first "stocktake," or assessment of overall progress, will occur in 2023.

The Paris Agreement lets each country establish its own goals—but these must grow increasingly ambitious over time.

Like the Kyoto Protocol, the Paris Agreement provides various mechanisms for offsetting their emissions, including "trading" emissions reductions from one country to another in exchange for money. Nations can also invest in green projects outside their borders and claim the resulting emissions reductions.

New to this treaty is a focus on both adaptation efforts and increasing financing for climate-related project. Both of these outcomes are only vaguely defined in the treaty, though. (Developing nations had hoped for a legally binding commitment that developed nations would invest $100 billion. While this number is still referenced in the text, it is not stated as a required target.)

Countries are legally obligated to report their emissions data, as well as information on their adaptation programs and how much financial assistance they have offered to developing nations. They are not legally obligated to actually follow through on any climate plans, though. The Paris Agreement, then, is basically just an commitment to fess up to what has and has not been achieved. The idea, in theory at least, is that all this public data will shame countries into taking action.

How has the agreement grown and changed?

Countries happily signed the Paris Agreement: by November 2016, less than a year after it was finalized, enough countries had ratified the treaty to give it legal force. (Compare that to the seven-year wait before enough countries ratified the Kyoto Protocol.) Currently, 188 states, along with the EU, are officially party to this treaty. The largest emitters who are not party to the treaty are Turkey and Iran.

Over the past few years, at each COP, the specific rules for the Paris Agreement have been refined and honed—though plenty remains up in the air. How to make emissions trading work remains unanswered and recent discussions have failed to result in any consensus.

In June 2017, President Trump announced his plan to withdraw from the Paris Agreement. This feels like history repeating: During the negotiation of the Kyoto Protocol, major concessions were granted in an attempt to accommodate U.S. interests, and then the nation abandoned that treaty. The Paris Agreement was built so that it could be palatable in the U.S. Nonetheless, the world's biggest power has jumped ship.

For the second time, the U.S. will soon exit a treaty that was designed, in large part, to accommodate its political needs.

Leaving the Paris Agreement is harder than just saying you want to do it. Its language requires that the treaty be in force for three years before any nation can formally announce withdrawal; then, after such an announcement, another year must elapse before the withdrawal can take effect. On November 4, 2020—the day after the presidential election—the U.S. finally, officially exited the treaty. President-elect Joe Biden has stated his intention to rejoin the treaty once he takes office in January.

How is it going?

Even before Trump announced that the U.S. would withdraw, it was clear that the Paris Agreement was falling short of its expressed goals. The first set of NDCs, if they're actually enacted, will not hold global warming below 2°C.

The Climate Action Tracker monitors 36 countries and the EU to gauge global compliance with the Paris Agreement. Only eight countries have implemented policies that are in alignment with the needed emissions reductions. The policies set in China—the world's highest-emissions nation—are deemed "highly" insufficient. The U.S., the world's second-worst emitter, is worse: it's "critically" insufficient in its climate goals. Sadly, a handful of other countries also fall into each of these categories.

A recent study in Nature found that in the few countries that have committed to  ambitious plans, those plans are not actually being followed. No country was both talking the talk and walking the walk. Right now, based on the policies in place, it looks like the world will warm 3°C by 2100.

We are running out of time to meet the treaty's goals: last year, the UN estimated that global emissions would have to fall by 7.6% each year this decade to keep warming below 1.5°C—a staggeringly quick pace. The Paris Agreement is more than nothing, but so far it has been far from enough.

How 3 Silicon Valley Whiz Kids are Saving the Planet