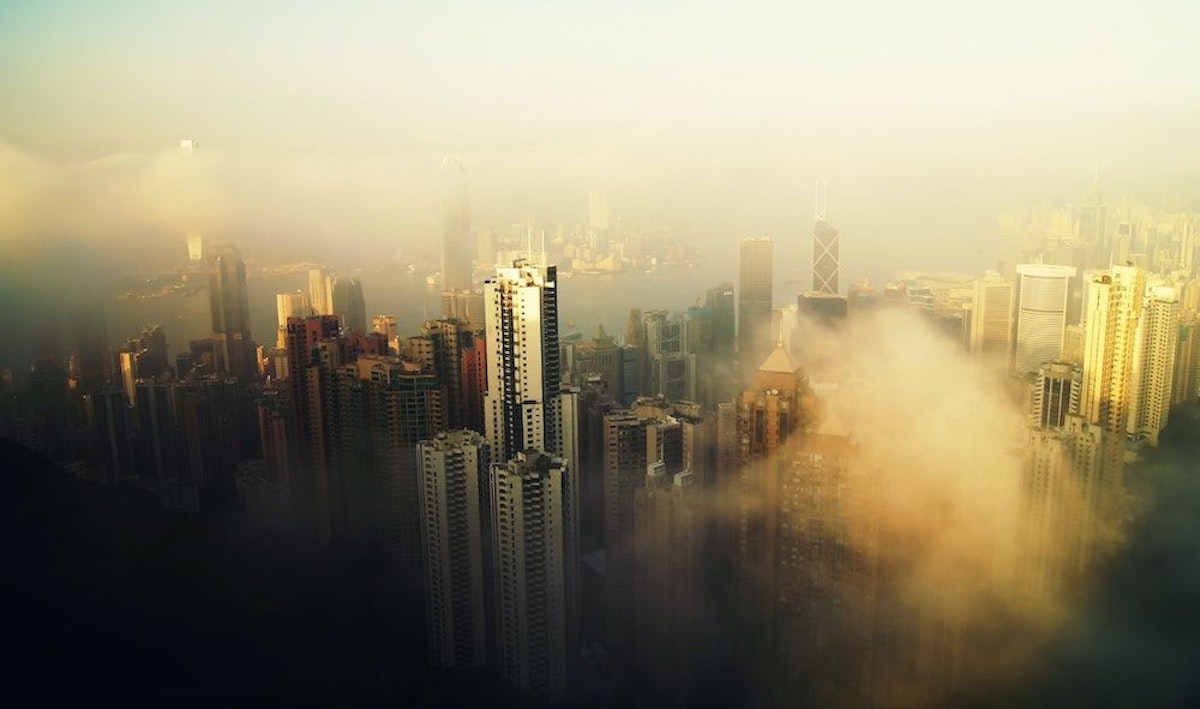 Back in 1965, scientists warned U.S. President Lyndon Johnson that rising atmospheric CO2 was likely to increase global temperatures. This was among the first governmental reports in the world to tackle climate change, if not the very first. And their projections sound dismayingly familiar today: melting polar ice caps, rising oceans.

The solutions proposed may be less familiar, though. The scientists believed that tiny, reflective particles could be spread across the top of the ocean, sending solar rays bouncing back into space, warding off the sun's heat.

Fifty years later, that same idea is still percolating. Not everyone is pleased.

Broadly speaking, "geoengineering" includes any attempt by humans to restructure the earth and its atmosphere at a large scale.

Think of the earth as a "climate system." Heat, in the form of sunlight, enters the system. Some is trapped by greenhouse gases—increasing amounts of greenhouses gases, these days. (For a full explanation of the climate system, check out this post.) This process suggests two strategies that might stop global warming: We can remove CO2 from the atmosphere, reducing the amount of heat that gets trapped; or we can reduce the amount of sunlight that enters the system in the first place.

Bright surfaces like ice and sand send sunlight away from earth, keeping it cooler. That's why solar geoengineering aims to make the earth and its atmosphere more reflective.

Both strategies, technically speaking, are geoengineering, though carbon removal technology is already in use and has become familiar enough to escape the slightly menacing aura of the term. So when people say geoengineering now, they are for the most part referencing that second strategy, solar geoengineering, also known as solar radiation management or SRM.

Bright, reflective surfaces like sand, ice, and clouds already send some of the sun's radiation bouncing away from the earth. Essentially, this heat never enters the climate system. By increasing the earth's reflectivity—or its albedo—it's possible to reflect more sunlight, counteracting the presence of greenhouse gases in the atmosphere.

How can we increase earth's albedo?

Volcanic eruptions already cause temporary increases in atmospheric albedo, as their sulfuric plumes combine with water to form reflective clouds. In 1991, an eruption in the Philippines led to temporary worldwide cooling of 1 degree.

The most common solar geoengineering proposal is based on this fact: We could create our own sulfuric aerosols and pump though out of airplanes or hot-air balloons. This is known as "stratospheric aerosol injection." (Some scientists have suggested calcite as a safer choice than sulfur as a base material.

Scientists are also studying the potential of "marine cloud brightening," in which salt is pumped from the ocean into the air. The salt might encourage condensation, creating clouds with more and smaller water droplets, which reflect more sunlight and persist longer in the atmosphere. Since cloud brightening would only have local effects, there is a particular focus on polar regions, where uncrewed ships with tall, salt-spewing masts might be deployed to protect precarious permafrost.

There are other clouds, meanwhile, that we want to remove from the atmosphere: icy cirrus clouds have a substantial greenhouse effect, enough to more than counteract the power of their reflectivity. Scientists have proposed sending drones into the atmosphere to seed cirrus clouds with solid aerosols, like dust or pollen, which would cause the clouds to break apart.

Giant space mirrors are, quite literally, the stuff of a James Bond movie. They're also a real solution proposed by scientists.

The 1965 plan to put particles in the ocean is still on the table, too, though it has been simplified: ships can churn up "microbubbles" that make ocean water more reflective. Unfortunately, the energy required for such an operation might be intense.

There are potential small contributions to albedo on land surfaces, too. We could engineer plants with waxier leaves. Or install white, reflective roofing on buildings. The global impact may be small, but such roofs could help cities weather heat waves.

On the opposite scale is a grandiose proposal to erect "sunshades" in space. Giant mirrors, in other words, that orbit the planet and block some of the sunshine.

Giant space mirrors are, quite literally, the sort of thing James Bond villains dream up. At this point, though, solar geoengineering is looking less like sci-fi and more like a soon-to-be reality.

At the behest of the chief United Kingdom government scientist, the University of Cambridge is launching a "Center for Climate Repair," which will study potential geoengineering solutions. In the U.S., the National Academies and the National Oceanic and Atmospheric Administration have launched their own investigations. China has also built a large, federally funded research program.

Data suggests we're not reducing emissions fast enough to hold down global temperatures—which has sparked a new interest in geoengineering.

The current boom in research can be traced to a 2006 paper, in which Nobel Prize-winning atmospheric chemist Paul Crutzen declared that the study of geoengineering was, regrettably, a necessary next step. Global politics had stymied any attempt to curb fossil fuel use. Something else was necessary. Crutzen's profile helped bring a new wave of attention to old ideas.

Still, so far most research has been conducted on computers, using digital models. The only known field experiment was completed in 2009 in Russia, as scientists release aerosols from a helicopter and measured how much sunlight passed through.

Further study has been stalled, and in some cases canceled. A prominent British field study, for example, was aborted in 2012 after strong opposition from environmentalists. Researchers at Harvard University hope to send a balloon 12 miles above New Mexico to release 2.2 pounds of calcium carbonate, but the university has convened an outside advisory committee that will determine whether it is safe and ethical to launch. Currently, no launch date has been set.

Why such restraint on research? Many people, scientists included, are wary about the unforeseen consequences of dumping huge volumes of particles into the sky. What will this do to ecosystems? What will it do to humanity?

One thing is clear: Solar geoengineering cannot solve all of the problems caused by CO2. Increasing volumes of carbon in the ocean, for example, are causing acidification, and this will continue even if there is less sunlight reaching the ground. (Research does suggest that geoengineering will have a dampening effect on CO2 levels by preventing the release of carbon from melting permafrost, so the overall extent of acification would decrease.) If we pursue solar geoengineering while allowing more and more carbon to flow into the atmosphere, we'll also create a perpetual, precaroius task. Because if we ever stop pumping aerosols, all that carbon might cause a sudden and catastrophic temperature jump. This is called "termination shock."

What will this do to ecosystems? What will it do to humanity?

There is also a worry that solar geoengineering will have unequal impacts across the globe. Some places will be better protected than others. It could even be used as a weapon, with one nation influencing another's weather. (Academics have already begun to study the potential for counter-engineering.) This leads to real concerns about governance and justice. Who gets to decide when and how geoengineering happens?

Scientists from the global south have suggested that developing nations, as the primary victims of climate change, should take the lead on making that decision. But they are not rejecting geoengineering out of hand. We are rapidly approaching a "dismal dilemma," as a group of such scientists recently put it: If we don't reduce emissions soon, and quickly, then we will have little choice but to do something radical.